Phenotypica at the Slime event, Institue of Making, UCL, London

We had the pleasure of taking part in the last Festival of Stuff Saturday Extravaganza event at the Institute of Making, at UCL, the past Saturday 24th of March 2018. 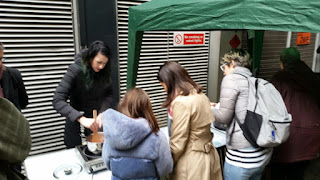 Slime was an event about polymers, and our stand was called ‘Art from Polymers: Bioplastic, DNA and Fruit Fly Cocoons’, the three polymers that inspire our artistic practice. We had exhibited two artworks; a video artwork, result of the initial period of Neus’ residency at the Reuter Laboratory at UCL, in which microscopy videos of bioplastic and fruit flies cocoons get decontextualized by the macro view and the constantly changing focal plane (https://vimeo.com/255299709). The other artwork was ‘Incubator for Twin Lifeforms’, an installation inspired by the formation of the pupae, and lots of bioplastic samples that people could manipulate. 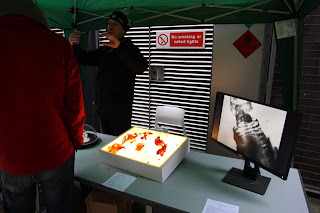 We were also cooking bioplastic live and visitors were very engaged with the process, wanting to know more about what each ingredient does. They were leaving our stand inspired by our artworks, with a freshly cooked bioplastic sample, and wanting to experiment with bioplastic themselves! 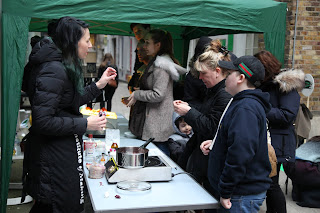 The event had approximately 4056 visitors; we didn’t stop making bioplastic, talking about its polymer nature, how it links to DNA and fruit flies cocoons and how we make artworks with and draw inspiration from the three of them, and having interesting chats with people. Certainly a great day! 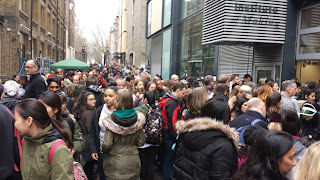 We had the great opportunity to exhibit our digital interactive installation Biomorpha (Evolving Structures) at the Affordable Art Fair from the 8th to the 11th of March.
Biomorpha explores the dramatic evolutionary pressure that can be caused by a sudden change in a species’ environment. An organism that is well adapted to a relatively stable environment can stay largely unchanged for millions of years. In a continuously changing environment, a species can undergo dramatic changes in a relatively short time, as there is a high potential for mutations that help it to survive in the new environment. This changes happen over a large period of time that is not perceptible for humans in real time.
In Biomorpha, the audience is the evolutionary pressure whom are tracked by a Kinect sensor when entering Biomorpha’s environment. The digital organism mutates at an accelerated pace, in order to adapt to the new environment that the audience is creating for it.

For this exhibition we introduced a new feature in the software that would capture all the shapes resulting of the interaction with the audience, as a material for further artworks.

We had a great amount of audience of a wide range of ages interacting with our digital organism, and it was a great experience to have the artwork installed in the centre of the fair, surrounded by international galleries.

Technically, we chose a more simplified set up to install Biomorpha, according to the specification of the exhibiting space that we were allocated. We had two entrances to the installation and we also installed a vinyl floor.

Neus
I am a multidisciplinary artist making art about science; genetics in particular. I am interested in the modes of interaction between the subject and the artwork, and how accurately such artworks present their scientific concepts whilst still exploring them through creative modes. My goal is to create artworks that bridge the gap between genetics and popular culture and that evoke curiosity and wonder about the mechanisms of life, synthesising the concepts into mixed media installations that create an emotional response so that people react to them as a human experience.